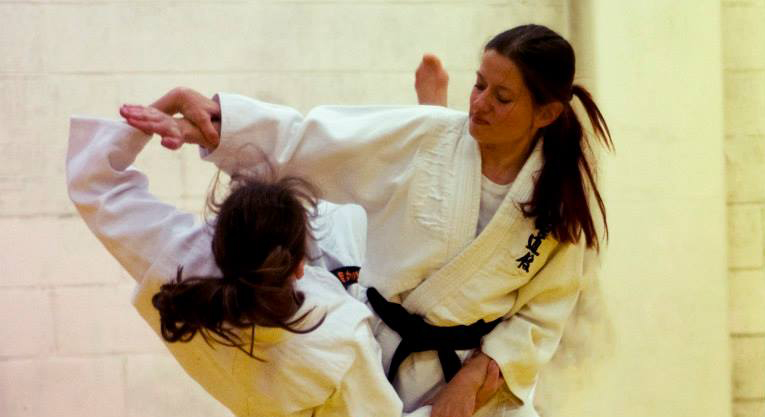 The Shodokan system of aikido was developed by Tomiki Kenji, a senior student of Uyeshiba Morihei (O Sensei), the founder of aikido. Tomiki opened the first Shodokan dojo in 1967. Today, we are under the instruction of Nariyama Tetsuro (Shihan) at the Shodokan honbu (headquarters) in Osaka, Japan. Nariyama Shihan was a student of Tomiki, and at 9th dan is the highest-ranking Shodokan instructor in the world today.

Aikido is a wholly defensive martial art, with the aim of protecting both defender and attacker from injury. We use timed body movement to evade and neutralise the attack, controlling the attacker through breaking balance and then applying throws and joint locks. Working in pairs, we take turns to play the role of defender and attacker (tori and uke). As tori, we learn how to apply a range of techniques to counter increasingly fast and committed attacks. As uke, we learn to attack correctly and to breakfall safely when thrown.

The Shodokan system of aikido includes kata – demonstrating set sequences of techniques as a co-operating pair; and kumite – attempting to apply techniques to an opponent in timed freestyle bouts. Both kata and kumite are tested in competition. The kata element is known as embu, and the kumite element is called randori or tanto randori. Participating in competition is not a requirement for Shodokan students, but those who wish to do so will have the opportunity to test their skills against other aikidoka from around the world via a programme of national and international events.

There are many Shodokan clubs throughout the UK and around the world. As a Shodokan Invicta student, you will become a part of this global family. When you step onto the mat at any Shodokan club, you’ll find the practice is essentially the same. At Shodokan Invicta, we follow the same path and maintain the same standards as our sister clubs, and many students of our club have gone on to train with Nariyama Shihan himself in Japan.